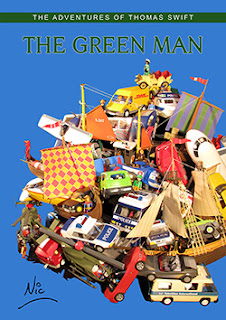 There are very few toys that remain in the market for more than one generation, or two at the very best. Since 1974, Playmobil figures have become a timeless icon in the industry. Their quality and versatility have remained flawless during the last four decades, allowing former children to give these amazing toys to their own children. It's not uncommon to find old "klickys" and their accessories in perfect condition after many years.

As a role-playing toy, Playmobil inspires kids to create their very own stories using whatever they've got handy. Very often, we've seen medieval characters hanging out with cowboys, pirates, or modern policemen, resulting in colourful dialogues and original stories, interrupted only by homework or dinner time.

Using this same creative spirit, Nick Foulger took his entire collection of Playmobil figures, some of which dates to his childhood (plus a camera and his computer skills), and created a 50-page comic book, "The Adventures of Thomas Swift, The Green Man". The book tells the story of Thomas Swift, an eccentric professor of Devon University who becomes a part-time detective to investigate strange events on campus, on request of his old friend and dean of Trinity College. Mystery, kidnapping, action, time-travelling, real history, and even a pinch of British humour are all part of this adventure "for children and adults alike", as its author states.

The comic book features high quality images depicting the story, set in the Playmobil world. Figures, vehicles, buildings, furniture, and even tiny details such as envelopes and tea cups are shown in such a way that you completely forget they are photographed toys. Extreme attention has been paid thoroughly to all details, including outfits, locations, and continuity.

All of the above combined with a great story make this comic book a one-of-a-kind. Sadly, it's no longer on shelves due to a claimed copyright infringment by the toy manufacturer; such a pity, actually, due to the remarkable quality of this comic. However, instead of playing the "evil corporation" role as in many other similar cases with an overwhelming lawsuit, the German company opted to buy all the remaining stock of copies from the author himself, and offer them as gifts to visitors in one of their factories in Germany, provided that any further reading material of his creation won't be used for commercial purposes. Therefore, the lucky owners who bought the book before that now have in their hands an invaluable Playmobil collectable.

Nevertheless, Nick has re-released his comic book absolutely FOR FREE in a series of episodes in his YouTube channel, featuring original and classical music, a delightful addition to the comic's fantastic original images. The episodes are available on English, German, French, and Spanish thanks to a team of devoted translators who share the same passion for this kind of literature and, of couse, Playmobil.

New episodes are available every 10-15 days approximately, and they're worth the wait.